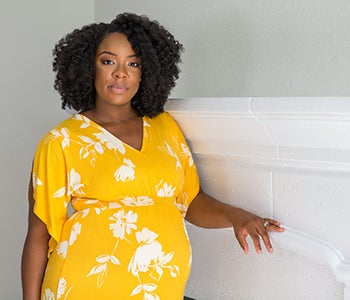 In New York State (NYS), Black women are more than three times as likely to die from pregnancy or giving birth as white women. This disparity has persisted alongside the U.S.’s rising maternal mortality rate, which has doubled in the past 15 years. Recognizing the urgent need for change both within their state and across the nation, NYS launched an initiative to engage women of color in identifying sustainable solutions for improvement.

“Black women across the nation are at risk, and there’s a need to find out what is going on,” says Nevillene White, a public health representative from the NYS Department of Health (NYSDOH) Bureau of Women, Infant, and Adolescent Health. “We need to talk to women—to hear from them about their thoughts on the solutions and strategies that can help combat this.”

In response, NYS developed a series of community listening sessions where women from high-risk areas across the state shared stories about their birth experiences and their thoughts on NYS’s maternal mortality rate. NYSDOH sought to create an atmosphere of trust and community that empowered women to openly share their experiences and come together to address the problems affecting their lives.

The sessions brought together several key stakeholders—pregnant women, women who had recently given birth, women who had a negative birth experience, family members of someone who had died during child birth, community-based organizations, and NYSDOH representatives—as equal partners seeking improvement. “This is a problem the State can’t handle by themselves, community-based organizations can’t handle by themselves, and nor can women,” says White. “We needed to come together, to sit at the table together, with equal power together and really address the issue.”

Over a six-week period, NYSDOH led seven listening sessions in seven communities experiencing disproportionate rates of poor birth outcomes, especially among Black women giving birth. Between 27 and 43 women were present at each, engaging in inquiry, dialogue and solutions-building.

The listening sessions revealed that women in these communities were facing significant barriers to optimal health. Participants often felt they were not being listened to by providers.  They also expressed feeling that judgement, disrespect, bias and racism affected the care they received. They said they were given very little information and education during maternity care and there were too few social supports in place in their communities. Everything they shared was collected in a comprehensive report, which NYSDOH is now using to inform its efforts to eliminate disparities in maternal mortality across the state. By listening to women of color, they’re developing relevant, culturally competent solutions.

The NYSPQC is one of 48 state and multi-state networks participating in the Centers for Disease Control and Prevention-funded National Network of Perinatal Quality Collaboratives. As the national coordinating center NICHQ enhances the coordination and communication of PQCs across the nation, advises state PQCs that are in early stages of developing their collaboratives, provides quality improvement technical assistance, and facilitates a Consultant’s Bureau of experts to support all PQC improvement efforts.

On April 23, 2018, NYS Governor Andrew M. Cuomo announced a comprehensive initiative to target maternal mortality and reduce racial disparities across the state. The listening sessions are a vital component of this initiative. NYS Health Commissioner, Howard Zucker, MD, JD, attended most listening sessions and shared the State’s commitment to improving systems based on what attendees shared. Before the discussions began, he explained that he was there to listen and helped frame each conversation by sharing data about maternal mortality in attendees’ communities. The Commissioner’s presence at the listening sessions affirmed the State’s commitment to having community voices guide statewide change.

Identify who you want in the room

The people most impacted by the problem need to be in the room. That’s why NYSDOH specifically sought out women from communities with poor birth outcomes, with an emphasis on Black women who have experienced an adverse birth outcome. Attendees were either women who were pregnant or had recently given birth and had a negative birth experience, or a friend or family member of someone who had died giving birth. Some listening sessions also included partners/family members who answered the same questions but were gathered at a table separate from women.

To invite these participants, the NYSDOH relied on community partners, specifically those working on the NYSDOH Maternal and Infant Community Health Collaborative Initiative. These partners already had deep roots in the community and could reach out to families who had stories to share.

Make attendance as easy as possible

Addressing potential barriers to attendance helped NYS consistently fill their sessions. They talked to community partners about where to hold each session, and typically chose a site in the communities where prospective participants lived. They offered transportation through subway cards or taxi services, and a meal; and they provided childcare so that mothers could fully engage in conversations knowing that their children were safe. In recognition of the participant’s time and expertise shared, NYSDOH also provided $50 gift cards to all attendees.

Most listening sessions began with a welcome and introduction from Commissioner Zucker and the sponsoring CBO. Then, participants jumped into the heart of the session: the table discussions. These were organized around four core conversation topics: planning for pregnancy, pregnancy, giving birth and birth outcomes.

To optimize the table discussions, NYSDOH developed a structure that encouraged honest, open dialogue from all participants. First, each table had no more than eight individuals, which gave everyone a chance to share. Each table also had two scribes and a facilitator. The scribes wrote down exactly what they heard, without judgment, and the facilitator raised discussion questions while being careful not to interject personal thoughts into the conversation. It was also important to give all organizers a job during the sessions, such as helping with childcare or organizing food, so that participants didn’t feel like someone was watching them. Together, this structure promoted a safe and trusting environment for honest conversation.

Have a mental health professional present

During the listening sessions, women shared experiences that were very personal and sometimes traumatic. Since talking about these experiences can be triggering, NYSDOH made sure each host organization provided a mental health professional at each session to provide support, if needed.

Make sure attendees know they were heard

After the table discussions, Commissioner Zucker participated in a “table speak back” allowing each table to share their most important takeaway; the commissioner listened and then spoke back what he heard to ensure accuracy. And at each session’s close, the Commissioner thanked participants and assured them he would bring what he learned back to the Governor, so it would inform State-level action.

“It was really empowering,” says White. “Women said they were excited that someone who could really make change was there and listening to them.”

New York State’s work reflects the vital need to elevate the voices of families most affected by persistent health disparities. Interested in learning more about engaging families and communities? This archived webinar from NYS focuses on the critical importance of engaging and learning from community voices to better understand and address racial and ethnic disparities. Or, read this recent article on developing authentic community engagement.

A Physician’s Reflections on Racism and Treating Sickle Cell Disease

For NICHQ’s current and future work, I am motivated by wanting to be a better version of myself in service of others. Wondering whether my own implicit biases impacted my care of patients and families, I realize that I cannot redo past ER experiences. If I could go back, I would slow down to acknowledge and try to set my biases aside and approach patients from a personally more informed perspective. But now, I can use my past, present, and future experiences to ensure NICHQ is amplifying important lessons from this multi-year effort reflecting the compassion, care, and commitment of hundreds of dedicated professionals in pursuit of equitable, accessible, and quality healthcare for people living with sickle cell disease.