A Call to Keep More Moms and Babies Safe

Preeclampsia, a dangerous disorder where a mother’s blood pressure spikes during pregnancy, is one of the leading causes of maternal and infant illness and death. According to the American Academy of Obstetrics and Gynecology (ACOG), it has increased 25 percent in recent decades.

There is an urgent need to reduce these numbers, to identify and spread evidence-based recommendations—such as those from ACOG—and ensure those best practices are standardized among hospitals and care providers across the country. Reducing severe pregnancy complications associated with high blood pressure, such as preeclampsia, aligns with the goals of the National Network of Perinatal Quality Collaboratives (NNPQC). The NNPQC comprises 43 state and multi-state teams applying quality improvement methodologies to improve outcomes for moms and babies.

“Improving systems of perinatal care depends on hearing from the voices of mothers and families; they are essential to any quality improvement effort,” says Pat Heinrich, RN, MSN, CLE, NICHQ Executive Project Director for the NNPQC. “Mothers and their families are directly affected by inefficiencies and gaps in care. Hearing about their experiences can not only help us better understand what gaps exist, but it supports a patient-centered approach to health where the mother’s voice is valued and informs her care.”

To elevate family voices, NICHQ is sharing a story from Valerie Diamond, a mother who lost her daughter to preeclampsia, and now serves as a mother partner on the NNPQC. Her story illustrates the urgent need to raise awareness about the prevalence of preeclampsia, seek and spread solutions, and keep family voices at the forefront of all improvement efforts.

“On April 19, 2016, we found out that we were pregnant with our first baby,” recalls Valerie. “We were so excited, yet surprised because it happened so quickly for us! My husband Robert and I were ecstatic—we were having a baby!”

Valerie’s early pregnancy went well. She experienced bouts of nausea, sluggishness and had an episode with severe stomach pain, but all her symptoms were considered typical by her care providers. At 11 weeks, she discovered she would be having a little girl.

“I remember I felt surprised again for a minute,” Valerie says with a smile. “I had thought the baby would be a boy. And then I was just so excited. I couldn’t stop dreaming about the things we could do together and the adorable clothes I could dress her in. We decided to name her Abigail, but Abbie with an ‘I’ ‘E’ for short. She would be like me and my sisters—all our names ending with the same letters.”

As the weeks passed, Valerie and Robert’s home began to fill with gifts for Abbie—new clothes, a stroller, a dresser and toys.

At the end of August though, things began to change. Valerie noticed that her feet were swelling significantly, and she began to worry that something was wrong. This much swelling, this early just didn’t seem right to her. Especially when coupled with her earlier stomach pain. She called her provider’s office and was assured everything was fine. After all, it was the middle of summer; it was hot; and she was pregnant.

Two weeks later at her 24-week check-up, Valerie, who had been researching on her own since her feet started swelling, asked about preeclampsia. Along with high blood pressure, common preeclampsia symptoms include protein in urine and swollen feet. However, according to ACOG recommendations, diagnosis can be made without protein in the urine. Additional warning signs include stomach pain, head aches or visual disturbances.

“My blood and urine tests were normal though,” explains Valerie, “and while my blood pressure sometimes spiked, it had always come down, so they weren’t concerned. They sent me to get compression socks instead, but I could barely get them on my feet because they were so swollen. I knew something was off.”

Over the following days, Valerie tried to ignore her discomfort, but her body kept telling her something wasn’t right; she had been feeling sick and anxious for days. Finally, on the morning of September 21, twenty-five weeks into her pregnancy, Valerie drove herself to her doctor’s office without an appointment. She knew that she and Abbie needed help. Once there, tests confirmed Valerie’s instincts: her blood pressure was dangerously high and there was protein in her urine.

“When I got to the hospital, they officially diagnosed me with preeclampsia,” says Valerie. “I was terrified, and my blood pressure was still sky-high, but Abbie’s heartbeat was normal. I remember being so relieved that I had chosen to come in that day. I knew about preeclampsia and I knew early treatment was our baby’s best chance for survival.”

“My doctors and nurses came into the room and they told me that we had to deliver Abbie now if we were going to save her life. The placenta had deteriorated, and she wasn’t getting the nutrients she needed.”

Valerie was immediately rushed into an emergency cesarean section. And at 8:56 p.m., on the same day Valerie drove herself to the doctor, Abigail Marie Pennington was born. She weighed just 1 pound and 6 ounces. Valerie, who was struggling to recover from her surgery, didn’t meet her daughter for another two days.

“She was absolutely perfect,” Valerie recalls. “It didn’t matter that she was so tiny; she had all her perfect features with beautiful light brown hair and tiny little fingernails on each little finger. I think she looked like me, but she had her father’s nose. She was ours and looking down at her, we were so happy.” 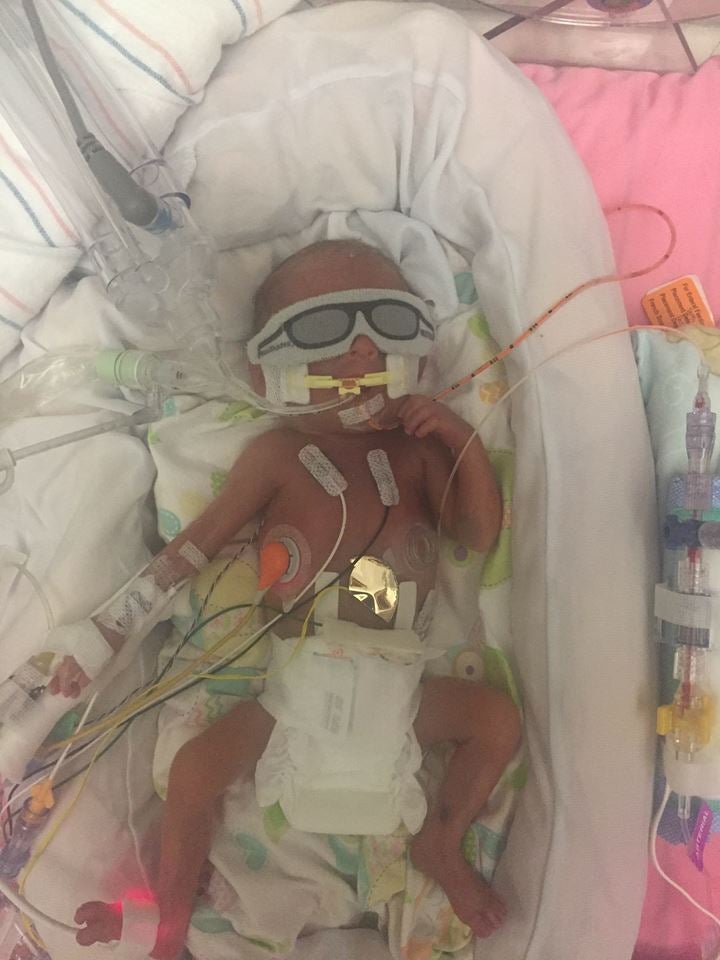 Six days later, Abbie’s health began to fail. She had contracted a serious E. coli infection due to acute chorioamnionitis, a bacterial infection that starts in the placenta before or during labor. Despite her doctors’ best efforts, Abbie’s body could not fight the infection and her condition continued to deteriorate.

During this time, Valerie was still struggling with her own health. She had been released from the hospital but then rushed back after feeling dizzy, seeing spots and getting another dangerously high blood pressure reading. She was still suffering from preeclampsia, the affects and risks of which continue after birth. Despite her ongoing symptoms, Valerie’s only concern though was for Abbie, whose health was once again worsening rapidly.

“They told us she wasn’t going to get any better,” Valerie recalls, “and she may have been suffering. It felt like my whole world had shattered. Robert and I just paced back and forth in the hall outside the NICU. Our hearts were broken but we couldn’t let her suffer. Taking her off the ventilator was an impossible decision, but it was the right decision for our daughter. She passed peacefully in our arms." 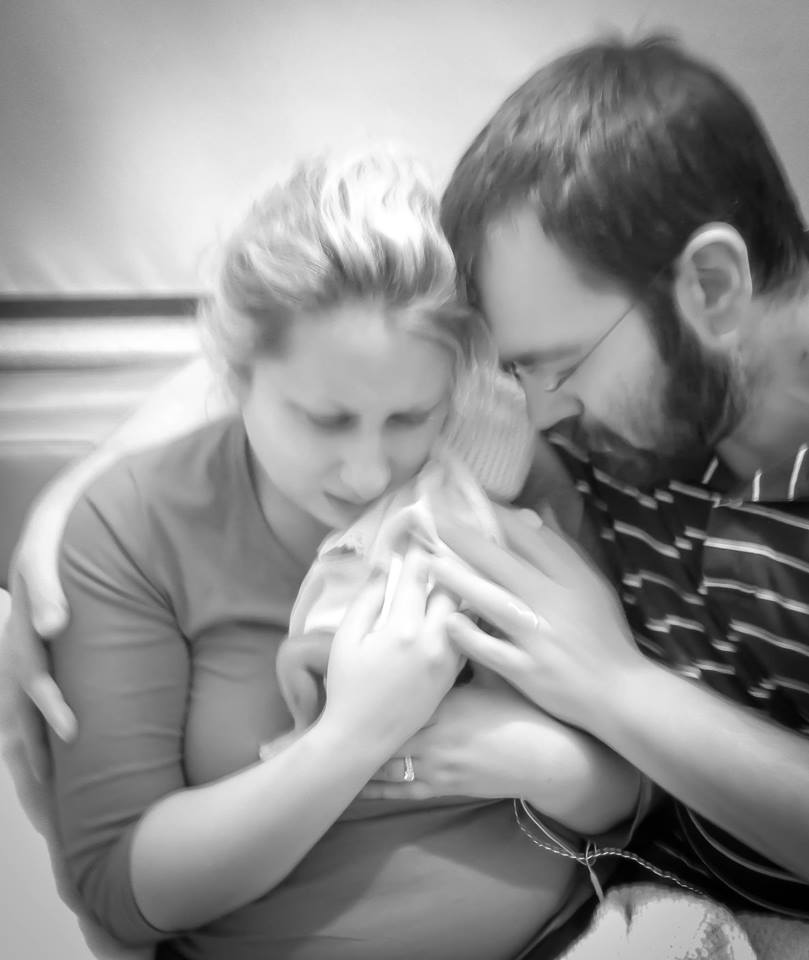 Since Abbie’s death, Valerie and her husband have struggled to come to terms with what happened to their family.

“We never got any more information,” she explains, “but I always wonder what could have gone differently. That’s why it’s so important to me that something changes in the U.S. There needs to be improvement. We shouldn’t have so many babies and mothers dying.”

Now Valerie is a passionate advocate for change. Along with joining the NNPQC, she’s chairing the Atlanta Promise Walk for Preeclampsia, which raises awareness and provides support for research and care improvements.

“Sharing our story has helped me to heal,” says Valerie. “I want all women and families to know what’s at stake so that we can unite more voices around the need for change. I want families to know this can happen to anyone and that it can affect mothers even after birth. And I want to help providers understand how important it is to listen to patients’ concerns, to take their voices into account.”

“We’re thinking about getting pregnant again, but we’re afraid,” she continues. “We’re afraid that unless things change, we might lose another child. That fear is why I’m so committed to this work, both for me and for other mothers.”

According to the Centers for Disease Control and Prevention, preeclampsia affects 4 percent of pregnancies in the United States, which translates to thousands of mothers and babies. The NNPQC is working with multi-disciplinary teams in 43 states across the nation to improve maternal and infant health care. Along with preeclampsia and high blood pressure complications, the NNPQC teams work on varied projects including efforts to reduce preterm births, improve care for neonatal abstinence syndrome, decrease the number of cesarean births among low-risk pregnant women and reduce disparities seen in vulnerable populations.

NNPQC family partners like Valerie ensure that families are active partners in improving care delivery. Their stories are shared, their voices are heard, and their experiences help accelerate improvement.

To Improve Maternal Health, We Must Depoliticize Racial Equity

Earlier this year, data from the Centers for Disease Control and Prevention (CDC) showed that maternal mortality rates increased during the first year of the pandemic, continuing a decades-long trend of increasing pregnancy-related deaths. With our Joint Organizational Commitment, NICHQ acknowledges that racism is a public health crisis and lays out our commitments to critically analyze and change our organizational systems with the goal of advancing racial equity.

Teams at the National Institute for Children’s Health Quality are preparing for an exciting spring 2022 conference season, where staff will provide keynote addresses, give poster presentations, and facilitate workshops at a variety of national maternal and child health conferences.

Patient and family partnerships are an essential element of health equity. By supporting patient and family voices and encouraging space for collaboration, public health professionals can help ensure shared vision and values are at the forefront of determining solutions to improve a community’s health outcomes. The National Institute for Children’s Health Quality (NICHQ) and the Florida Department of Health Office of Children’s Medical and Specialty Services have recently developed a Roadmap to Inviting, Engaging, and Including Patient/Family Partners in Quality Improvement and Other Related Initiatives.

The Maternal and Child Environmental Health Collaborative Improvement and Innovation Network (MCEH CoIIN), a national initiative led by the Association of Maternal and Child Health Programs developed the MCH Lead Poisoning Toolkit to share innovative practices and methods that nine different state teams tested out to improve access to systems and services that address the needs for pregnant women, infants, children, and families that are exposed to lead.